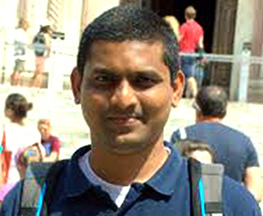 Dr. Suresh Anand is a PhD in Biomedical Engineering from IIT Chennai (2013) and did his post doctoral research at the National Institute of Optics, NRC, and at the Dept of Physics and Astronomy, University of Florence, and at the European Laboratory for Non-linear Spectroscopy (LENS) in Florence, Italy during 2013-2017.  Although an Electrical Engineer by training he ended up in different disciplines switching between laser technology, physiology and oncology, integrating light for minimally invasive based diagnostics. During graduate days at the Indian Institute of Technology Madras, he was focused on the development of synthetic tissue models and investigating the effects of quenching phenomena on the fluorescence emission spectra. In addition he developed a diffuse reflectance spectroscopic system for monitoring the wound healing process in diabetic foot ulcer.  At LENS, he developed a multi-modal optical spectroscopic system for the delineation of tumor margins during pediatric surgery. This work utilizes different spectroscopic modalities based on different types of light-issue interaction. Furthermore, by taking into account the intrinsic spectral differences along with analytical models and pattern recognition algorithms he  elucidated the pathological differences between normal and diseased tissues. His research work at LENS also included the development of an optical spectroscopic system for differentiating different types of cancer in head and neck oncology.

Over the past few years, he along with his colleagues at LENS developed a combined spectroscopic system along with efficient tissue classification algorithms.  With a clinical study involving hundreds of patients, the potential of the device  for improving diagnostic accuracy was demonstrated. He is dedicated to further advancing the clinical translation of multi-modal spectroscopic techniques and develop innovative instrumentation and tissue classification algorithms for disease diagnosis. He has published his work in high impact journals and has contributed to many books and has been a reviewer for international journals in his discipline.